Skip to content
Questions? Email us at- Hello@espinbikes.com | FREE shipping on ebikes to the lower 48!
Shopping Cart
Home›All Products›21 Nero

FREE shipping on ebikes to the lower 48!

Back in stock! Limited Quantity
Order now for delivery in 5-10 business days

Prices are subject to change depending on delivery date.

The ultimate fat tire sport utility ebike. Ride on any terrain, or use it for any task. Take a ride in the wilderness or go shopping for your groceries. With a super comfortable ride and 50 mile range, the Nero is suitable for endless adventures or everyday errands around town.

Note: You may receive different branded parts than listed below due to supply shortage. What is the difference between Espin’s Sport and Flow eBikes?

The Sport comes in a 17 inch diamond frame and is for riders looking for a more sporty and aggressive riding style.

The Flow is a European inspired design built for the urban commuter who wants to zip through traffic and ride comfortably. It has an elegant 17” step-through frame that allows you to mount and dismount easily and safely anytime you want.

Can I ride my Espin pedal-assist eBike in the rain?

Yes, we have waterproofed all the wiring and electrical connections so it can withstand rain. Of course, one should not let the bike just completely soak in the rain if possible, but there is no need to worry about riding in rain.

How much does an Espin pedal-assist eBike weigh?

Each model has a different weight. Please review the product page for the specific model to find the weight of the bike.

What type of brakes does the Espin pedal-assist eBike have?

The Espin pedal-assist eBike has 160 mm dual piston hydraulic disc brakes for both the front and rear wheels.

What type of saddle does an Espin pedal-assist eBike have?

Espin pedal-assist eBikes come equipped with the Selle Royal Freeway saddle with a soft-touch cover and shape memory. Our saddles use slow fit foam which is a visco-elastic material that molds to the rider’s body and guarantees a uniform weight distribution. Our saddles also reduce shock and vibrations to give you the most comfortable ride.

What are Espin frames made of?

Espin pedal-assist eBikes are made from 6061 aerospace grade aluminum alloy.

What is the maximum recommended weight limit?

The recommended maximum weight limit is ~275 to 300 pounds depending on the model.

Can I assemble it myself?

Yes! The assembly takes less than 15 minutes and we even provide all the tools you need. If you run into any issues, you can follow along in the assembly video:

Why am I receiving different parts than expected?

Due to the shortage of supplies, certain parts may be different from what is listed on the spec list. In order to ensure that we get you riding on your new Espin bike as soon as possible, we've had to replace certain parts with other brands of a similar level. Potential parts that may be affected are the tires and derailleur.

How do I maintain the life of the battery?

Please make sure to charge the battery once every 3 months if it is not being used for an extended period of time. This will help maintain the life of the battery. Failure to do so will result in a loss of range per charge.

What is the range on a single charge?

Each Espin Bikes has a different range. Please refer to the specific model's product page to find the range of the battery.

How long does the battery take to fully charge?

A full charge takes approximately 6 hours. The battery is detachable from the frame so you can easily charge the battery when you are at home, work or even while you are sitting at a coffee shop.

How long until a battery needs to be replaced?

The battery is expected to last about 2-4 years or around 500 charge cycles.

What is the max speed?

All Espin Bikes have different top speeds. Please refer to the product page of the specific model to find the top speed.

What type of tires does Espin use?

Espin pedal-assist eBikes use Kenda Kwest 26 x 1.95 tires with reflective strips for safer night riding. These are solid tires that are ideal for city riding. Soft enough to give you a comfortable ride yet hard and thick enough to handle sharp turns and not get interrupted by small sharp objects.

What maintenance is required?

Maintenance is exactly the same as a regular bike other than the four main electrical components: battery, motor, controller, display. You should do basic tune-ups on your bike after the first 100 miles. Regular tire pressure checking is important as you want to keep your tires inflated for maximum riding comfort. Other than that, the electrical components should require minimal maintenance and if any issues arise, please follow the instructions to diagnose the issue, which will be included in the user manual. If you are still unable to fix the problem, please submit a warranty claim and we will process your claim as soon as we can as we understand you want to get back on the road as quickly as possible.

Can an Espin be serviced at any bicycle shop?

Yes, any bicycle shop can make repairs on your bike. If you would like recommendations for bicycle shops in your area, our customer support team would be glad to assist you.

What is an electric bike (eBike) and what makes it different from a regular bike?

Do I need a license to ride an eBike?

No, federal law treats electric bicycles just like normal bicycles as long as they are limited to 20 mph while being powered by the motor and has less than 750 watts of power. Each state has different speed restrictions so you should check your DMV for additional information. California has categorized electric bikes into 3 tiers:

Espin pedal-assist eBikes are Tier 3 electric bikes, except for the Flow which comes set as Tier 2.

If there is anything that wasn't answered, please email us at hello@espinbikes.com and we will get back to you shortly!

How is my bike shipped to me?

Your Espin Bike will be shipped directly to the address listed at no additional cost. Though our bikes come 90% assembled out of the box, we strongly encourage you to work with a professional mechanic to assemble it if you are not comfortable doing it yourself.

If your question about online orders has not been answered above, please call (510) 982-0850 or email hello@espinbikes.com.

Espin Bikes allows you to return your purchased item for a period of 14 days from the date of receipt.

In order to process a return, you must email us at:

To be eligible for a return, the bike must be packaged in the original packaging and free from damage. Upon receipt, Espin Bikes will assess the bike for damages.

Cost of damages will be deducted from the refund.

- Accessories are not eligible for returns except in cases of malfunction

Espin Bikes will not issue a credit until it is in possession of the returned item. Refunds will be issued within 2 weeks of receipt of the item returned.

Order Cancellation: Any order can be cancelled for a refund as long as the bike has not been shipped. Refunds before shipping will be subject to a 3% processing fee. This is a fee we cannot get back.

Every Espin pedal-assist eBike comes with a 12-month warranty for all components and a 3-year warranty for the frame.

The warranty coverage only applies to the original registered owner of the Espin pedal-assist eBike and is not transferable. Warranty does not cover normal wear and tear, failures due to abuse, neglect, improper repairs, improper maintenance, modification or accidents.

Register your Espin to initiate the warranty period. 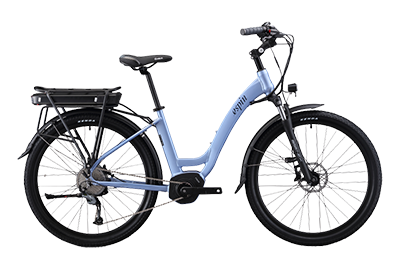 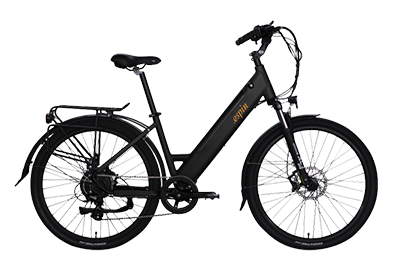 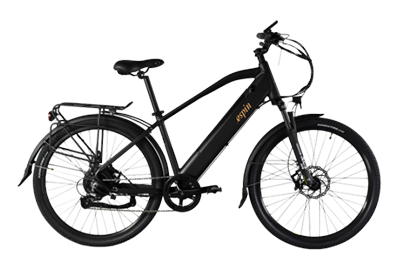 Espin pedal-assist eBikes are a great solution for your company's transportation needs.

With Espin pedal-assist eBikes you encourage a healthy and sustainable way of getting around that is fun, good for the Earth, and has health benefits.

Try it out by requesting a demo for your company.

Explore the world in full color

Thumb the throttle and activate power on demand

Ride with peace of mind

Sturdier than ever with a new reinforced frame

Powerful 180 mm hydraulic disc brakes bring you to a clean, quick stop — the Espin testament to control and safety.

I ordered the Nero on Black Friday during Espin's sale for $1149. Wow! What a steal! This bike is awesome. This is my first electric bike but if you are in the market for a sturdy, powerful, all terrain fat tire bike the Nero is the bike for you.

The assembly was very easy and straight forward if you follow along with their video. I have some basic knowledge of bikes but had never assembled a bike before, and I managed to put it together in 45 minutes while taking my time. Battery was ~75% charged upon arrival, so I plugged it in while assembling to add some more juice. I noticed the front disk break was rubbing after putting the wheel on, so I took some time to tweak it until both sides were positioned correctly.

First ride out I took it 20 miles using moderate petal assist and moderate throttle and used up 2 out of 5 bars of the battery. I was mostly riding around pretty fast too, so the range was impressive. The bike is heavy, as expected and huge. My sister (5'6) took it out for a spin, and it seemed very large for her stature. I'm 6'3 so it fit me well but it is still big to maneuver around. The top speed I was managing in PAS 5 was around ~23mph and I'm in the works of figuring out how to go into the settings to increase it. Off road the fat tires really smooth out the bumps and you feel like you can conquer any terrain, on the pavement they were not too noisey. The hydraulic breaks are also very nice to have. You need to have some stopping power for a 70+ lbs bike going 20+ mph. Long story short: big, powerful, good range, awesome!

I got the bike today so I have yet to see how it holds up, but I'm sure that with Espin's build quality it will last a long time! 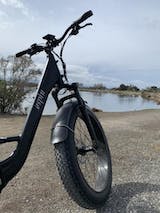 S
S.h.
This is about my Nero bike

Very happy with the eBike itself. However, included instructions are not complete. The booklet describing the electronics for operation are printed in such a small font that even with reading glasses, it was too small to read. I had to scan it in to the computer, magnify and print. Supplied suspension fork instructions are for a retrofit installation only, with no description of possible adjustments or settings. No use or mounting instructions for some optional smart phone holder parts, wheel reflector mounting instructions, or how to use the mounting bar diameter adapters for the optional rear rack carry bag clips. There are also 2 stud mount reflector squares that I can't find any sort of mounting holes for. I suppose you could add the white reflector to the front fender mount assembly. No idea what to do with the other (rear) red reflector. With current seat attachment hardware changing to a different seat will be difficult. I damaged one of the weird electrical cable connections after multiple connect / disconnect while routing cables. There is a headlight issue that would only be noticed if you damaged the extension cable as I did. Normal conditions, the headlight with extension cable attaches to the optional front rack. Temporary fix until an extension cable can be acquired: the headlight attached to the front fender mount using the supplied bracket will be pushed out of position by suspension fork compression if the optional front rack is installed. You could also remove the front rack or bend the headlight mounting bracket to solve the mounting issue.